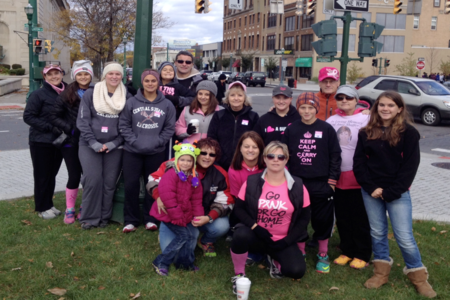 If you see any of these kids, please wish them “Good Luck” in college!

Thursday, September 3rd was a day filled with Professional Development and other meetings!  CSTA decided to break up the day and add a little fun!  Everyone across the district came together to enjoy lunch provided by the CSTA! 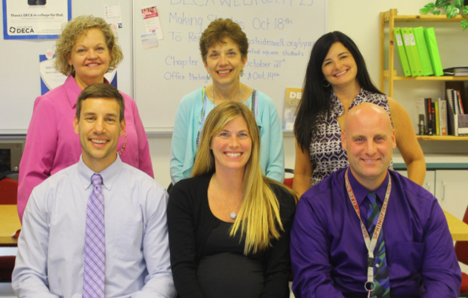 The entire building at HME went Christmas caroling to the retirement community of Lyndon Lawn at the end of Barker Road.  Mr. Hurne, our music teacher taught the school 4 Christmas carols.  The students walked together with the older grades paired with the younger grades.  Each group was either Santa, reindeer or elves.  Parents also joined us in caroling.  It was so much fun!  We can't wait to do it again next year!

Baby news- Nicole Heath had a baby girl on September 30th. Welcome Ellowyn Catherine! How precious are you?! 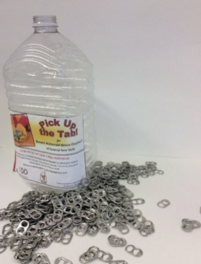 Lisa McAllister, a health teacher at Central Square Middle School is the recipient of the Oswego County Retired Teachers Association Grant.  The grant money will be used to purchase training materials for the First Aid and CPR Unit all 7th grade Health students participate in.   The materials include an Automated External Defibrillator training device, four anti-choking trainers and an airway simulator.  These materials will significantly impact the student learning experience.  The materials will supplement video and instructor demonstrations with psychomotor skills practice.  The AED trainer and the anti-choking trainers will familiarize students with proper hand placement, body position, depth of compression and set up in order to provide optimal survival opportunities without injuring their classroom partners. Aligned with the district mission statement, "to empower all students as citizens in a changing world" there is no greater need than to increase the population trained in cardiac survival skills.  If you see Lisa, please congratulate her!

SHINING LIGHT ON THE FIGHT AGAINST HUNGER The Elementary Art Department is once again helping to support our local community.  This year, all of our 5th grade Art Club students under the direction of their art teachers, Amber Cerio, Katie Fitzsimmons, and Sarah Lekki, are creating Ceramic Tea Light Luminaries.  The Luminaries will be sold for a $5 Donation at various district events throughout the 2015-2016 school year to raise funds to support our local food pantries-Brewerton Food Pantry, Central Square Community Food Pantry and the North Shore Food Pantry.

TOYS FOR TOTS
Brewerton Elementary is a collection location for Toys for Tots. Students and Staff unite in a common cause and generously donate new, unwrapped toys to be given to less fortunate children in the community, thus helping them to experience the joy of Christmas. 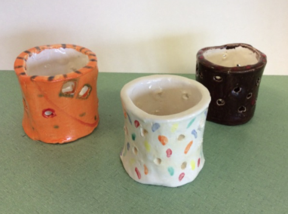 Millard Hawk Primary took part in a charitable activity this year called Knots of Love.  MHP set a goal to make 250 fleece blankets to donate to the Rescue Mission.  The students and families at MHP collected fleece material and monetary donations from September thru January.  After the collection, students, families, and staff got to work cutting and tying to create warm and cozy blankets.  These blankets were then distributed to the Syracuse Rescue Mission, Central Square’s Downstairs Scotty, and the Military Personnel at Hancock Airport at a school-wide assembly.

The Paul V. Moore High School Business Department was selected as Business Department of The Year for Region 7 by the Business Teachers Association.  Members of the department will be recognized for their accomplishments at the BTA Conference in October.  Way to go Joe, Nicole, Damon, Dottie, Diane and Michele! 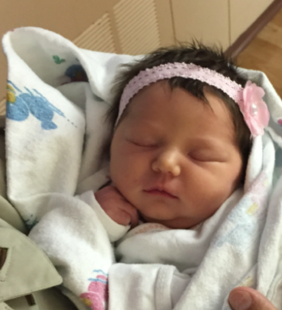 The elementary Art department of Sarah Lekki, Katie Fitzsimmons and Amber Cerio did a fundraiser with their 5th grade Art club students to raise money for the Central Square Lions Club.  Students created an original  house magnet.  All together they were able to raise $670.

I tend to keep a low profile regarding the different ministries I’m involved in, but the union asked if I would discuss my mission’s trip to Haiti, so here it goes.  In September, I went with a group of ten people from my church, Lyncourt Wesleyan.  Our team was made up of my pastor, two school teachers, several construction workers, and a nurse.

While there, we constructed a concrete school building of three dirt floor classrooms in Babaco, a country village about two hours outside of Port de Prince.  With little hardwoods on the island, structures are built of block or rebar and loose-packed concrete.  The water for our concrete was from a stream about a mile away; local women carried this water in buckets on their heads.  There were other classrooms on the site that didn’t have any furniture.  We were able to use what limited supplies and tools we had to build several tables and desks for the teachers and students at the school.  After each school day was done, students would come over to the local church for games, singing, and a message.  Many of the children knew the church songs.  The only exception is that they would sing in Creole, a combination of French and African languages, while I played guitar and sang in English.  It was a very blessed time!

One of our most moving experiences was visiting a hospital run by Catholic Missions.  This hospital was for babies whose parents were unable to adequately feed them.  The children would stay in this hospital for three months or more, receiving regular meals and medical aide, until they were deemed healthy enough to go home.  Many of the babies were just so small, thin, and looked near-death.  Parents were only allowed visitation for a few hours each day.  We spent our time there holding and feeding babies, and wiping away a few of our own tears.

Another memorable time was when we visited a country church and school in Petit Riviere de Nippes, a four hour trek from Port de Prince.  The church there was little more than a concrete shed.  Their pastor, who was also the school superintendent, was struggling to keep his school running.  Many students in the area can’t pay the $25. per month tuition, so he’s not able to afford to keep teachers long-term.  Additionally, he allows girls to attend his school who, as young children, had been forced into prostitution.  The pastor told us, with tears in his eyes, that people in the community are outraged that he allows these girls to attend the school.    He only wants to offer these girls hope and an opportunity for a better life through faith and education.

The trip definitely gave me a lot of things to reflect on.  The book, When Helping Hurts, was recommended to me by several people down there.  There are plenty of examples in Haiti where aid organizations have done so much to help, but that help has created an unhealthy dependency and unbalanced relationship between the receivers of aid and the givers of it.  The old adage is the ideal: It’s better to teach a man to fish than to just give him one.  So, the work that organizations do in Haiti to help educate people, teach skills, etc., are the ones that are making the best long-term impact on poverty.  This takes time, though.

Another reflection I had is that, despite whatever we have going wrong in America, we have a lot of things that are going right here.  An infrastructure of usable roads, clean drinking water, garbage pick-up, electricity, law enforcement, public schools, etc., are things that most of Haiti just doesn’t have.  Children aren’t even required to go to school there, and many don’t because they can’t afford it!  This creates a cycle of increased poverty and lost opportunity.  As the poorest country in the Western Hemisphere, the average person in Haiti makes only $5. a day, which, even by their standards isn’t really enough to live on.  I’ve been so blessed in my own life, but I felt almost guilty about all that I have in comparison to the poverty I saw.

Through it all, though, the Haitian people really are incredible.  They have such a better sense of community than we do.  People there don’t seem to be so caught up in the materialistic avenues that seem to entrap most Americans, as we strive to buy the biggest and the best ______________ on the market.  Also, between the extreme heat and humidity, poverty, and a lack of resources, the Haitian people have to deal with incredibly difficult living conditions.  They take all this very much in stride, though.  There were never any arguments or fighting amongst the people that I noticed.  I think I only saw three police officers the whole trip!

So much of my trip linked up with the novel that we’re reading in class, A Long Walk to Water.  In class, it has been very exciting for me to show photos and talk about my experiences in Haiti that directly connect with the book!

In closing, I would highly encourage anyone who has the opportunity to go on a missions/humanitarian aid trip, please go on one!  You’ll never see your community, the larger world, or even your own life in the same way!  God bless and au revoir!

PICK UP THE TAB for Ronald McDonald House Charities of Central New York
Brewerton Elementary students and staff collect the small tabs you pull to open aluminum soda cans all year long and donate them to the Ronald McDonald House where they redeem them for cash.  The collection makes a significant impact on their ability to keep families together while children are hospitalized, giving them a "Home Away From Home". 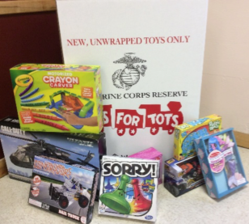 Gina Duggleby…..what have you done now?

October has been a month of positives abound!

Vicki Dale, a teaching assistant, went above and beyond by helping a student achieve their goal in health class by walking with her during academic time!

Jen Colvin, an Art teacher, brought about some Halloween spookiness with a presentation on Tim Burton and designing a project around the scary holiday. These seemed like such fun to create!

Our Homecoming weekend was kicked off by a rocking pep rally. Each class did their very best to demonstrate their school spirit and pride. Class competitions, messy games, performance from our amazing marching band, highlight of all of the fall sports, and announcement of the homecoming court. Then followed by a parade and our homecoming football game. Fun was had by all!

Thank you Pam Rosati and Dale Cripps for all of your years of service!  Your dedication to our students, as well as Central Square School District has not gone unnoticed.  Enjoy this next chapter!Type your paragraph here.

Reclaiming the Joy at Brewerton

The December, 2015 Educator Spotlight features our own Gina Duggleby!  Way to go!  Please click the following link to read the article!

On Monday, September 7th, staff and students decorated the sidewalk outside of PV Moore High School.  The sidewalks were decorated with various messages for the students coming back Tuesday and Wednesday!

Here are some photos of us caroling and also some of the fourth graders working with the first graders to make Santa necklaces. They wore them caroling and then some gave them to the people we saw caroling.

CSTA - Reclaiming the Joy of Teaching!

Continuing a Tradition of Partnership, Innovation, and Educational Excellence

Congratulations to the following people for receiving tenure in September 2014!

If you happen to see them please congratulate them on a job well done.